Fernando García & Dani Landi are the owners and winemakers at Comando G. The two are nice guys, Fer & Dani. People like them. They’re drawn to them, to wines they make, to the work they’re doing. And what they are doing is quietly starting a wine revolution outside Madrid in foothills of the Sierra de Gredos mountains. 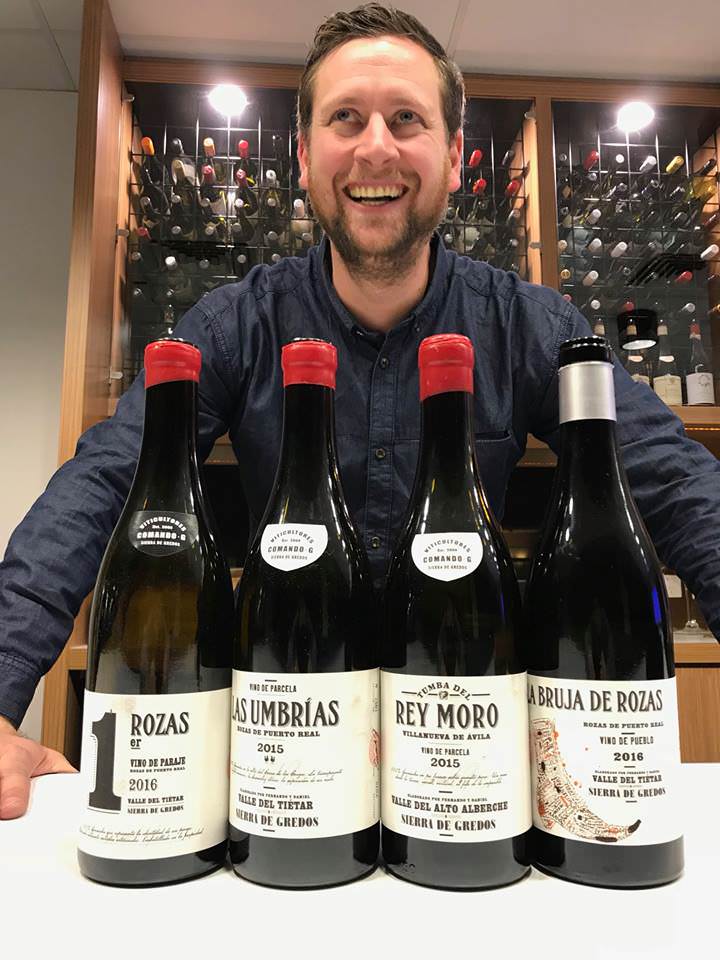 Fernando García & Dani Landi are the owners and winemakers at Comando G. The two of them are nice guys, Fer & Dani. People like them. They’re drawn to them, to wines they make, to the work they’re doing. And what they are doing is quietly starting a wine revolution outside Madrid in foothills of the Sierra de Gredos mountains.

They’ve named their small wine project after a favourite childhood cartoon, Comando G. In Australia, for those who remember, it was called Battle of the Planets. They want to do something fun and not take themselves too seriously. But they do take the vines seriously. As they do the wines they make and so do a host of sommeliers in London and New York. There are a few restaurants where they can be found like Mosman’s Ormeggio at The Spit and Chippendale’s Automata to name just two.

“What started as a pastime has become the point of reference for the area, one of the main advocates for bringing back Garnacha, and also one of the most exciting success stories in the Spanish Wine World over the last decade.”
Luis Gutiérrez – The New Vignerons

In the world of fine quality can often fudge in favour of doing, seeing or tasting something new or important. Not here. Not Comando G. They are new and, given the influence have gained in a mere 10 of operations, they are important but they are also good. Very good. And they fall in between the ‘can’t stop talking about them’ good and the ‘quiet and let me enjoy them’ good. 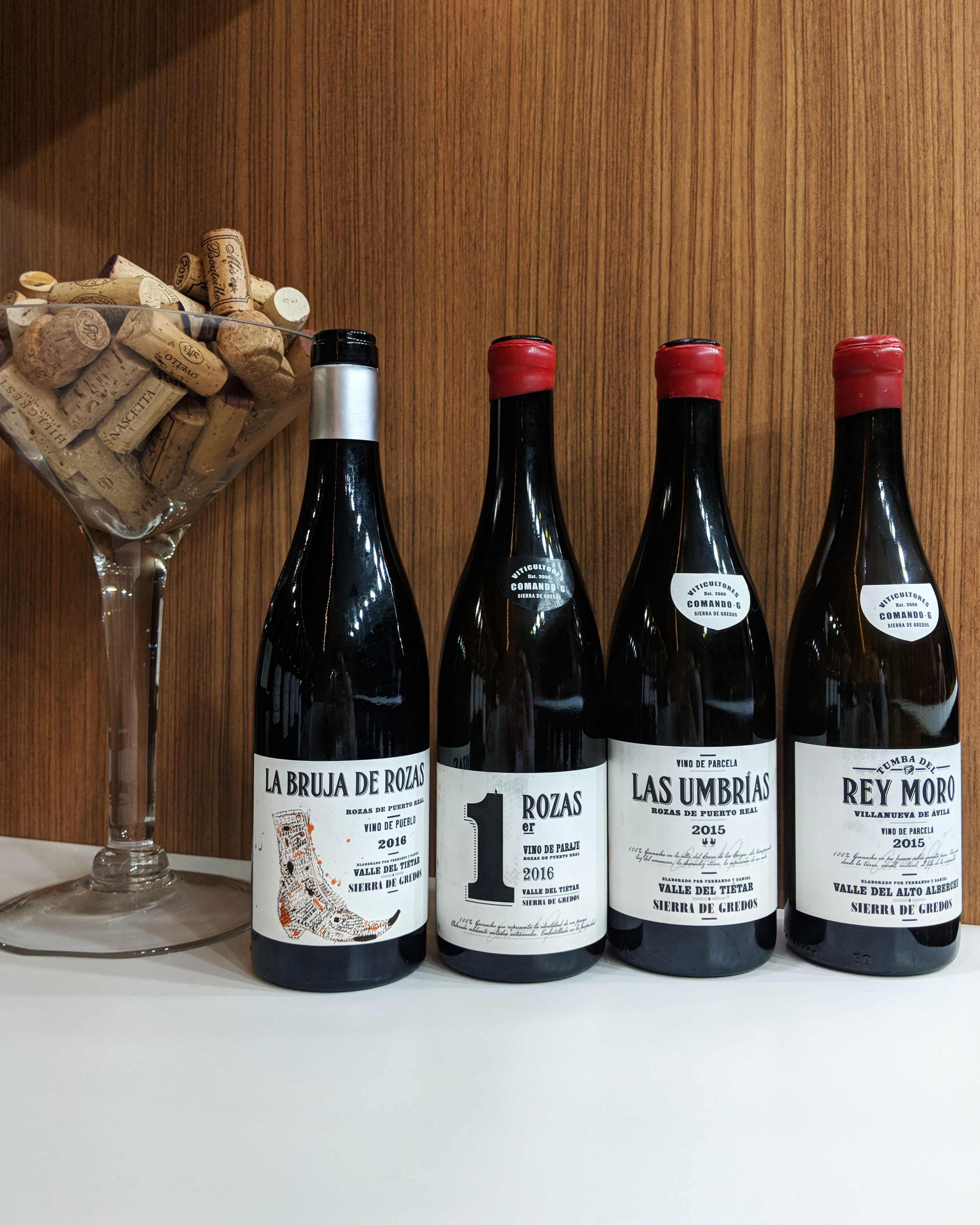 Fer and Dani focus their efforts on Garnacha or Grenache. Over time they’ve convinced some of the landowners to part with some of their plots. The challenge of acquiring vines around Rozas was the burden of tradition. Many landowners who had inherited small vineyards had familial and emotional attachments to the land but neither the time nor the resources to care of the vines. The absence of commercial planting and the terrain combined with the fragility of the vines make the cultivation of these vines a painstakingly laborious undertaking. Fer and Dani, to convince locals to part with their holdings, had to convince them that their intentions were honourable.

Being somewhat local has helped. Drinking beer in Rozas with people from the area helped identify vineyards with the most promise. Tasting homemade wine, some good, some bad, some vinegar has been essential too. A few of the wines they tried, even through their faults, showed pinpoint acidity that shone even in hands of amateur makers. In the hands of gifted and principled winemakers Fer and Dani, these wines could become something truly special.

The La Bruja de Rozas is a Villages style wine. The name translates to ‘the witch of Rozas’ owing to the ethereal and somewhat unsettling permafog, trapped by the mountains, that surrounds the moss-covered granite, the mottled grass and spidery leafless trees that look like the contrivances of Hammer Horror film set. The fruit is sourced from several vineyards around near the village of Rozas.

The wine on the palate starts with a high pitched note of acidity, followed by a fine minerality that opens out into a cherry profile with some black fruit hidden in there somewhere. This is a texture first, flavour second kind of wine. Don’t think of it as a quaffer, there’s far too much going on, but the glass empties after a series of quick sips. There’s a little bit of Villages Pommard about this wine but the progress of the minerality and acidity in the mouth mark this out as different. Pommard is a good reference point but there’s no mistaking one for the other. A great introduction to Comando G and Grancha de Gredos.

The Rozas 1er cru Garnacha is, as the name says, classified premier cru by Comando G. Elegance and poise are the watchwords for this wine. It’s is a Garnacha, but unlike, La Bruja it leans less on Pinot comparisons and more towards those of Langhe Nebbiolo, though importantly not Barolo as it is so approachable when young. The brick-red tinge to the wine immediately suggests Langhe and the tannins second the motion. The 1er is a good guide to understand this Grancha because it is more ‘er’ in many ways than the La Bruja. The vines are older, the soils are lighter and the altitude of the vineyard is higher. This wine plots the map to the limited run single site ‘Las Umbrias’ which manages to be even more delicate. The Gredos shape of the wine is clear. On the palate, it’s the acid note first, then the minerality, then the flavours of cherry complexed by subtle savoury notes. As a 1er cru second step into the world of Comando G Garnacha and the Sierra de Gredos appellation, it’s almost impossible to fault.

Sierra de Gredos – not an appellation, yet 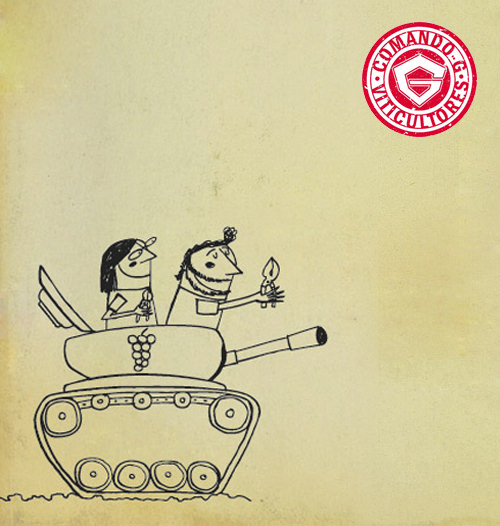 The Sierra de Gredos mountains in central Spain peaks out at around 2500m above sea level. Here, there are ski resorts, glaciers and the Sierra de Gredos national park and the small quiet town of Rozas de Puerto Real, or Rozas for short, and it’s in this area Comando G can be found. Higher than 1100m above sea level grape growing become unreliable if not impossible. The ancient Garnacha vineyards that produce Comando Gs grapes between 900m and 1100m. While still in Madrid, Rozas, Comando G and their vineyards are at the intersection of three appellations. The DOs (denominación de origen) of Castilla y León (known for Tempranillo), Toledo (producing a lot of Bobal and Tempranillo) and Madrid (far more inclined towards Monastrell and more muscular Garnacha) meet in the Gredos mountains. In this area, there is a great layer of granite that force the vines to work and give the wine a wonderful minerality. However, geographically, geologically and viticulturally, the Sierra de Gredos is quite distinct from the three DOs mentioned.

“They had suddenly become the most sought-after and talked-about name in the Spanish wine revival during the decade of the 2010s.”
Luis Gutiérrez – The New Vignerons

For these reasons, Fer & Dani have been campaigning (as yet unsuccessfully) to create the Sierra de Gredos appellation. Two hours from Madrid, up in the mountains, on a bed of granite, with ancient bush vines, Comando G produces fine and delicate wines in a culture where the big wines dominate and the bull is the national symbol. What they have achieved in just 10 years suggests that these two winemakers can do anything, even find consensus to change where tradition, superstition and agri-politics meet. 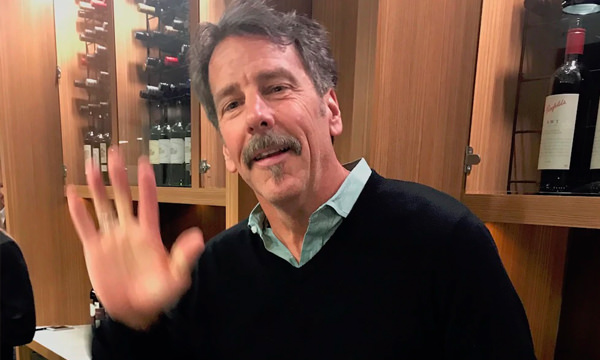 Chris Carpenter’s business card says simply ‘Winemaker’, but that only hints at his responsibilities…