Quality and value at every price-point this week, whether it’s more than $2000 for three bottles of 100-point Penfolds Grange or a mere $35 per bottle (in sixes) for the super-smooth 2013 Lindemans Pyrus – that’s half-price, by the way.

Those three vintages of Grange did indeed all score 100 points, each one from a different critic, so it’s fair to say that our offer presents three variations on red wine perfection.

Something we neglected to tell you when we launched the Grange offer was that the three bottles come in a purpose-made wooden presentation box.

And there’s more (as they say), in the form of Chardonnays from Margaret River (Devil’s Lair) and the Yarra Valley (Oakridge), the two regions that vie for Australian Chardonnay supremacy, and a delicious (not to mention affordable) new-vintage Barossa Shiraz from our friends at Hare’s Chase – Ironscraper 2016, of course.

See the full Wines of the Week here. 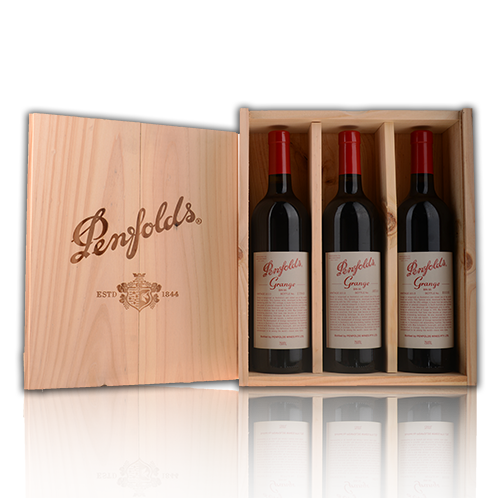 One bottle of each wine in a wooden presentation box.

With three gold medals and 96 points from James Halliday, 2013 Pyrus should be well and truly on (and not under) your radar – especially at half the normal price.

‘… luscious folds of black, purple and red fruits, ranging from cassis to plum, a chorus of almost sweet tannins and quality oak rounding out the finish.’
96 points, James Halliday

Coming up to five years after it was made, this 2014 Chardonnay – from a single block within a single vineyard – is considered one of Australia’s best ever.

With only 830 dozen made, and the winery now selling the 2016 vintage, the 2014 will surely soon become harder to get. It will be at its best from now until at least the mid-2020s.

A new vintage of Ironscraper Shiraz is noteworthy simply because this wine is such a favourite with Langton’s customers.

Why? Easy. One, it’s rich with dark-fruit flavours yet it’s also elegant and savoury, and two, it’s made by Barossa veteran Peter Taylor, who was a senior winemaker at Penfolds and knows the key Marananga sub-district (it’s Grange country) like the back of his hand.

Thursday was International Chardonnay Day, and Margaret River’s entry in the ICD stakes was this feisty two-year-old.

Fresh, clean and expressive, the 2016 Devil’s Lair shows a classic Chardonnay profile including all the different smells and tastes of lemon meringue pie.

In most places this is being read, the weather is getting colder, and the sense is that it will soon become colder still.

Time for good red wine. And in this regard, of course, we are at your service.

Enjoy the rest of your weekend, and don’t forget that there’s a raft of auctions closing at 7pm on Sunday night, including our regular Weekend Unreserved sale.